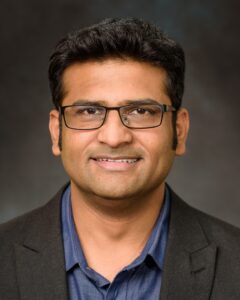 Research Areas
Ramana Vinjamuri received his undergraduate degree in Electrical Engineering from Kakatiya University (India) in 2002. He received his MS in Electrical Engineering from Villanova University in 2004 specialized in Bioinstrumentation. He received his Ph.D. in Electrical Engineering in 2008 specializing in Dimensionality Reduction in Control and Coordination of Human Hand from the University of Pittsburgh. He worked as a postdoctoral fellow (2008-2012) in the field of Brain-Machine Interfaces (BMI) to control prosthesis in the School of Medicine, University of Pittsburgh. He worked as a Research Assistant Professor in the Department of Biomedical Engineering at the Johns Hopkins University (2012-2013). He worked as an Assistant Professor in the Department of Biomedical Engineering at Stevens Institute of Technology (2013-2020). He is the recipient of the Harvey N Davis Distinguished Teaching Award in 2018 at Stevens. His research at Stevens was supported by Research and Innovation grants from the New Jersey Health Foundation. He received the NSF CAREER Award in 2019 and NSF IUCRC Planning Grant Award in 2020 respectively. He also holds a secondary appointment as an Adjunct Assistant Professor at the Indian Institute of Technology, Hyderabad, India. His research interests are in the areas of – brain-computer interfaces, neuroprosthetics and exoskeletons, machine learning, and signal processing.